My boys love diggers! So you can imagine the excitement when we received the Mega Machines Wire Controlled Toy Excavator. We just needed to put this child’s toy through it paces because the kids really wanted to play with the excavator as soon as it arrived. 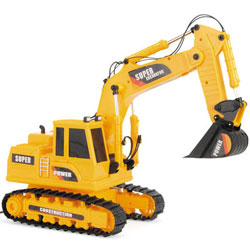 Firstly this construction toy is actually quite to set up. There certainly won’t be any building involved.  The Mega Machines Wire Controlled Toy Excavator looks and feels quite sturdy. With little ones getting their hands on it in my house it kinda needs to be. 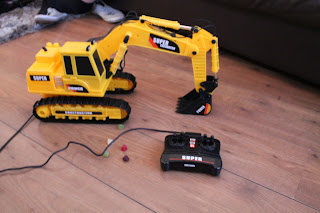 The excavator is powered by a remote control. Quite similar to RC Devices. This is a wired product which encourages your children to move around with the vehicle whilst the dig.

The vehicle does move at a pretty slow speed but then again an I can imagine a real life excavator would. The arms and front bucket moves from side to side. The cab movement is also pretty good. I would say quite lifelike again.

After I got the boys to take turns we laid some sweets on the floor and challenged each other to take turns in trying to lift them into the bucket and placing them down again elsewhere.  This actually works ok. The bucket does touch the floor allowing you to pick things up but I would suggest using larger items rather than small ones.

The Mega Machines Wire Controlled Toy Excavator does make a whirring noise when moving but that’s to be expected from remote control toys. I can say it’s not very loud so it doesn’t get on your nerves. 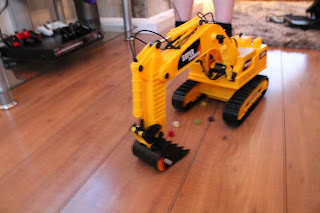 Although the boys played with this toy quite often and the seemed to have fun whilst doing so. It’s bulky so expect for this to take up a little bedroom space when you buy it. 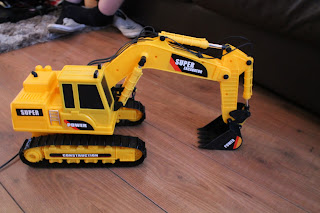 The Mega Machines Wire Controlled Toy Excavator encourages hand eye co-ordination. This product also helps fine motor skills and assists with your child’s concentration levels. Its a great toy which has been well designed and worth purchasing.

The Excavator is not suitable for children under 36 months according to the manufacturer’s.

All in all this is a great toy and will assist your child to learn whilst having fun.

The Box of Shocks Review – Scream, Gasp and Magic Fun!