Home » Reviews » South Pacific at the Leeds Grand Theatre Review
This breath taking and lavish Lincoln Centre Theatre production reinvented the classic Rodgers and Hammerstein show, swept the 2008 Tony Awards, played to sold-out houses on Broadway, and was televised across America.
Set on a tropical island during World War II, this is the sweeping romantic story of two couples, threatened by the realities of war and by their own prejudices.
Its portrayal of Americans stationed in an alien culture in wartime is as poignant today as when it first thrilled audiences in 1949.
I am a huge  fan of musicals  and have grown up watching them  yet one musical I haven’t  seen is “south Pacific” .I had no knowledge of the story line which made this visit to the Grand theatre all the more exciting.
The first act introduced us to Nellie played by Samantha Womack, Emile de Becque and his two adorable children Ngana and Jerome played by Fabienne Jae Clarke and Finton Flynn at his plantation home, singing a very catchy tune “Dites-Moi”. 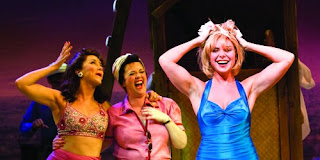 In the next scene 12 very hunky sailors bounded to the stage dancing and singing in complete harmony with such strong voices and a fantastic dance routine. I had never heard the song before but now keep humming the tune over in my head.

Another fantastic number was “I’m gonna wash that man right outa my hair” by Nellie and the Nurses again a very fun number with such a strong lead vocal by Nellie.
Further strong and emotional vocal performances came from Daniel Koek who played Lieutenant Cable with “Younger than springtime” and Jodi Kimura as Bloody Mary singing the breath taking number “Bali Ha’l “
This production had sadness, laughter, romance all you could ask for and more in the form of two naked Bottoms running across the stage! A must see for anyone who believes love can conquer all.
(We were sent to review south pacific by the Leeds Grande Theatre for the purpose of this review. All thoughts and opinions are of my own)
Summary
Reviewer
Rachel Hirst
Review Date
2012-08-06
Reviewed Item
South Pacific at the Leeds Grand Theatre Review
Author Rating
4

Things to do in Leeds | Chiquito Mexican Birstall Review